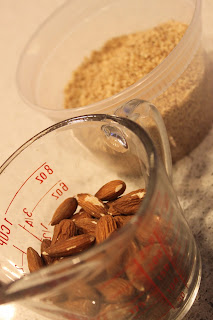 I decided today to try and make some almond meal and it seems to have turned out just fine. At least it looks fine - I'll do some baking with it tomorrow to test it out.

There are basically two kinds of almond flour that you might come across in many gluten-free recipes: almond meal or blanched almond flour. Almond meal is basically just raw almonds finely ground with the skins on - I haven't actually seen this in the store but I made my own (see above). Almond flour is generally the kind you would buy in the store and it is made from blanched (skins removed) almonds. They do some further processing to it so it is a lighter flour to use in baking - not sure if you make your own  flour from blanched almonds if it will work in all recipes but feel free to give it a shot. You can get blanched almond flour in bulk at Bulk Barn or order it online.

Almond flour/meal is a great alternative to wheat flour in cooking and baking because not only is it gluten/wheat-free, but it is high in fiber and protein and low in carbohydrates (which is what makes it really stand out from other gluten replacements which are generally high in carbohydrates). Also, it is moist, flavorful and easy to work with. The big downside is that it is significantly more expensive than wheat flour. That's why you should use almond meal (which is significantly cheaper to make from bulk almonds - I like Costco ones best) when you can.  I should have some recipes made with Almond meal coming soon since I have a fresh batch.

Mama makes Almond Meal
To make almond meal I just put 1 cup of raw almonds in my food processor (I have a very basic Black and Decker model but you could also try a coffee grinder). I pulsed the almonds until they were like fine sand. It took a couple of minutes. I stopped it every so often to check on how fine it was getting to make sure I didn't over process it and end up with almond butter. It should still look like dry sand. If it starts getting gummy you are grinding too much. If your food processor isn't getting it fine enough for your liking you might want to put it through a flour sifter and put the larger particles back through the processor until they are fine enough. Like I said I have a pretty basic food processor and I didn't have to do this so hopefully you won't. Voila - almond meal.

Email ThisBlogThis!Share to TwitterShare to FacebookShare to Pinterest
Labels: Ingredients