If you have been here before you know that I STRONGLY believe that the food we put in our bodies plays an huge role in how we feel, how we act, how often we get sick, etc, etc, etc. I believe its the root cause of many diseases. And we often "treat" symptoms we are feeling with pharmaceuticals when really its just our body telling us that we are eating something that it doesn't like. I also believe that we incorrectly assume that just because someone doesn't have "digestive" problems that other problems they might be having (for instance headaches, moodiness, shoulder pain) are not a result of a digestive lining issue. A food sensitivity. 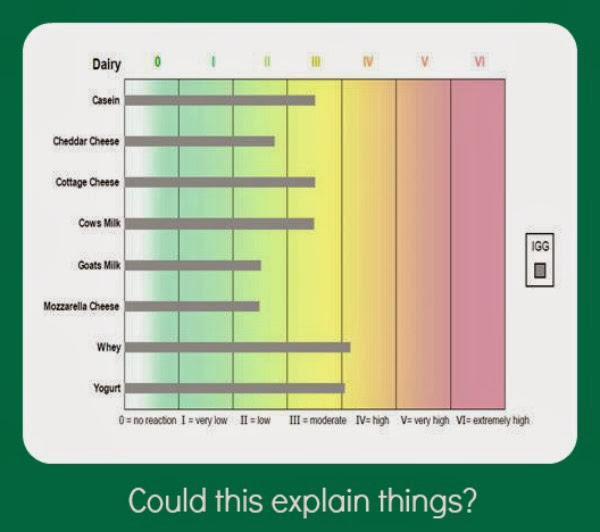 I believe it to the extreme because I have seen the difference a change in diet can make on a person's overall health.

I have seen it make someone transform into a different person. My first daughter ("T") went from a sickly, sad and moody baby and toddler to a thriving and healthy little girl. Read her story here.

I have seen it eliminate a lifetime of stomach aches and insomnia. I've seen it transform someone who is just getting through the day, someone completely and utterly exhausted, into someone who is energetic and happy (most of the time). Me.

My second daughter ("A") wasn't a colicky baby. She wasn't a sick, sad and moody baby and toddler. But she is getting to be a pretty moody Pre-school-er. She has more temper tantrums as a 4 year old then she ever did as a 2 year old. She is kind of on edge. Highly emotional.

And she always had a rumble in her chest as a baby. And she had a runny nose, pretty much consistently from when she was a baby, until this past spring. When it suddenly cleared up.

What happened in the Spring?

We changed T's diet. And when T's diet changed all of our diets changed. And we decided that if T was going to drink almond milk then A was too.

So all of my kids stopped drinking cow's milk. All of my baking is dairy free.

But A was still getting her dairy fix in little ways. We would let her sprinkle "SPRINKLE" cheese (code for Parmesan) all over her gluten-free noodles. We let her eat butter straight up (her favorite food). She ate pizza and cheese and yogurt. And perogies.  Not all the time but here and there. We weren't as strict with her as we were with her sister. We didn't think we needed to be.

Needless to say her dairy consumption was dramatically reduced but by no means eliminated.

But just like her sister, I started to suspect that something about her behavior was just not right. She is not acting like my little girl.

Yes, it could very well be middle child syndrome or the transition of me going back to work or several other things. Maybe its just normal 4 year old behavior and I'm looking for excuses.

But like I said at the beginning, I strongly believe that behavior can be directly linked to food. When my Candida was flaring I was so very moody. I was walking around in a constant state of severe pissed-off-ed-ness. I was mad. And then I cut sugar out of my diet. I went on the Candida diet. I took anti-fungals. And what happened? I found myself again. My happy self. My more patient self. My "I get pissed off for a reason" self........not the "I'm pissed off because I'm awake" self.

And I suspected that my little spit fire shouldn't be eating dairy. I just had a hunch.

So we paid the $300 to get her IGG food panels/food sensitivity tests run.

And they came back this week. So low and behold what did they say?

The IGG panels we had run test 9 categories of food. 90 different foods.

A's came back pretty much clean except for the entire DAIRY category. See above.

But something is throwing her off kilter.

And now maybe we know why?

Only time will tell.

But in the meantime, we are going to tighten up on her dairy consumption. No more Sprinkle cheese. No more butter (although that was so cute because it was just like my Dad and it reminded me of him every time she requested some butter off the knife). No more perogies. No more milk chocolate.

If you have kids, if you have moods, if you have unexplained symptoms................I urge you to look at your diet(s). Could it be something lurking in your fridge that's the cause? Put down that sandwich and pay attention, maybe your body is trying to send you a message? Maybe?

BTW - Baby toddler brother "L" had yogurt on Thanksgiving weekend and had a piece of pizza (real pizza) last night. Rare and unusual occurrences. Both times he broke out in a rash.  Huh - I wonder why that happened?

Posted by MamaChanty at 4:00 AM

Email ThisBlogThis!Share to TwitterShare to FacebookShare to Pinterest
Labels: Week in review